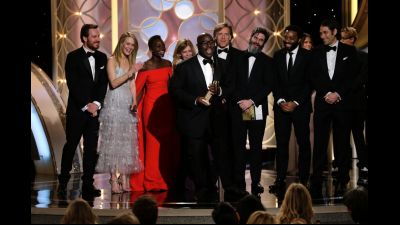 So I watched the Golden Globe Awards last night. I don’t always watch it, but I’ve been pretty busy this year and so I wanted to catch up on my movies a bit. bottes ugg pas cher (Of course, i recorded it and watched it about an hour and half later so I could skip all the commercials and boring parts.) Hundreds of films are made each year and some cost hundreds of millions of dollars to create, produce and bring to market. I couldn’t help but find some parallels in the business world and so I’d like to share these quick marketing lessons that we can learn from Golden Globe caliber films. adidas pas cher Know What Kind of Movie You’re Making — Most good movies have a point. adidas femme Great movies however, have a single message and every decision made in producing the movie leads the audience there. adidas zx 750 The same is true with your brand. Everything counts and truly great companies focus everything the right direction to generate the intended resulting behavior. Have you ever seen a movie that can’t decide whether to be a comedy or a drama? Admission starring Tina Fey and Paul Rudd is a good example of this. louboutin chaussures It’s a pretty terrible movie, but mainly because it never drives you anywhere. There is no point and thus by the end you end up confused and really wishing you’d chosen a better movie. Vanilla Sky also falls in that camp for me. And both of these movies have “A” list talent and solid execution, but their messages are so messed up the arrow never makes it from sender to receiver. How often do we see this scenario play out in the marketplace? Takeaway: Spend time on your message (script). Be True to Your Vision — Every movie has a vision and there are challenges along with the way, but the ones who end up receiving awards for their greatness make the right decisions to stay true to their vision of the movie. In business, we have mission statements, vision statements, etc. asics chaussures but these things are meaningless without the daily commitment and discipline to stay true to the vision of the company. Takeaway: If you really believe in your vision, make long-term strategic decisions and not short-term stop-gap ones. Don’t Give Up…Ever — It’s almost cliche in every acceptance speech for winners to talk about their struggles and how this movie almost didn’t get made or collapsed at some point from lack of funding, interest or controversy of some kind. But winners don’t give up…ever. Business is never easy and nothing worth having is, so don’t give up and you may just be able to tell the tale of those hard times some day. Takeaway: Failures happen. adidas ultra boost Learn from them and don’t give up. Companies can learn a lot at the movies. Business and movie-making both involve compelling, focused storytelling. adidas chaussures But there’s usually a lot more riding on the execution of a business message than the cost of movie ticket and some popcorn. adidas superstar aliexpress I encourage you to look at your company’s script and make sure it’s Golden Globe worthy before you execute anything else.

« Communicating in a Selfie-Centered World» VIDEO: Tune Your Message