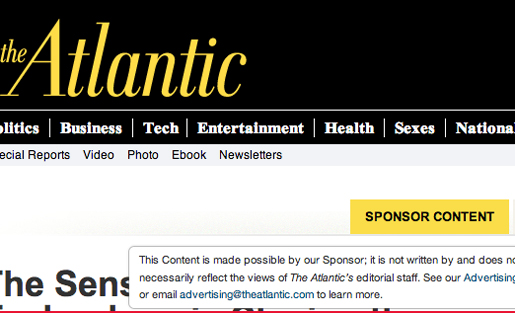 HBO’s John Oliver really took the digital marketing business out to the woodshed this weekend for a much-needed swatting surrounding the concept of “native advertising/content” and how it is corrupting the independent and free press here in the good ‘ol US of A. bottes timberland I agree and I loved the piece. When you start with the principle of “how can we trick the consumer into thinking our way and doing what we want,” then you already have a big problem in your marketing program. A big ethical problem and one that it likely to ripple into other people’s business, like PR for instance. As it stands today, PR works pretty well and it works due to TRUST. Not that everyone believes every word that runs in the media, but our media has a higher trust factor than business, organized religion and gov’t put together. basket nike So when an editor or reporter brings us a story, we’re inclined to believe it, trust it more than when a company brings us the exact same story. nike air presto soldes (remember the part about not trusting business?) Enter native ads or native content. chaussure nike adidas zx flux This is where a media outlet cleverly disguises an ad message into an editorial format in an attempt to get the consumer to drop his or her ad-blocking walls, take in the information and engage in some type of sales-driven behavior. Oliver cites some good examples of how TIME, The New York Times and the Atlantic recently have done this and he rightly expresses concern about how this practice, while profitable, might just be the un-doing of our free and independent press. Most marketers lack the common sense or ethical compass needed to know where the line is on this stuff, and so they really need be left out of it. nike internationalist Like the greedy farmer who killed the goose to get all the golden eggs at once, they are the problem and the media outlets need to get them out of the henhouse (so to speak). But how will we pay for it? I say crowdfund it. adidas stan smith Pas Cher If thousands of Americans will spend money on Kickstarter to fund an exercise wheel for cats, I’d say a few shekels to support the free press would probably do pretty well. ugg pas cher Or newspapers could follow the lead of the OC Register and NY Times and start putting up paywalls for their exclusive content. Both papers are proving it can be done and thus the walls between paid content and actual journalism and even earned PR can remain intact. As someone who loves PR, I’d have to see it ruined by greedy marketing idiots who created this new native content and defend it with a barrier of reconstituted bovine waste (or bullshit) that just stinks. The battle is for trust. The editorial media still have it, but they are only a few “native content” pieces away from losing it forever.