New Marketing Plays for These Days 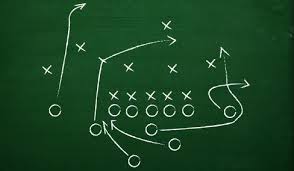 Professional football fascinates me. It’s the strategy behind how to move the ball 10 yards (or more) and the myriad of options to do it that gets me. And of course it all comes down to plays. Having just the right offensive play called against the defensive opposition at just the right time to produce fantastic results. That’s the game right there. But sometimes, the plays have to change and that’s usually because the defense (which has its own plays) has figured out how to stop you. Lots of great parallels in marketing and I can’t help but notice how many companies seem to be running their offense from a very outdated playbook. nike air max homme So I thought I’d share a few plays that I see working out there. Old Play: Creating any type of staged media event on location. You know, it used to work and much better than simply a blank backdrop or logos. But did you see Hillary Clinton’s visit to the Iowa coffee shop? I’ve seen better facades on the Universal Studios Tour. And she was called out in real-time across social media for being “fake,” and big news flash, it was staged. Every. Single. nike air max 2015 Minute. Used to work…people are too smart now. The defensive has caught up. New Play: Being real. No staging or dressing because we’ve all seen the facades, the actors and when you insult our intelligence, we just know you’re full of it. Old Play: After something awful happens, you hold a press conference and apologize and explain what you’re going to do about it. Ok, this isn;t a lock to work anymore, but can depending on the situation. asics gel lyte 5 Ironically enough, the NFL ran this play last year with its ridiculous mishandling of the Adrian Peterson situation and got smoked for it. Again, fans live tweeting that they didn’t believe the apologies were sincere. (They weren’t sincere). nike air max 2016 soldes The defense caught up again and sacked them for a big brand and reputation loss. New Play: Again, be real. The audience is too smart, too savvy for your spin today so you probably won’t fool them. There is no substitute for real people behaving like real people. The defense can’t stop it because guess what, they’re pretty fallible people too…and deep down inside, they know it. Old Play: Interruption. Oh, how marketing LOVES to interrupt interesting things people are doing to stick in their much less interesting stuff. But, we are growing less and less tolerant of this thinking and the defense will start to block, limit and remove themselves from these messages (especially as more abuse occurs). New Play: Be as interesting or even more so than what they’re doing. nike internationalist When you look at what’s really working out there, you see that it’s a creative approach that entertains people and gives them what THEY really want. If you aren’t really analyzing (psychologically) what your customers want/need, then how do you even start to play on this field? And there are many more, but the point is, use the offseason to sharpen your marketing offense with some new plays and you might be able to move the ball a little better. …And use last season’s playbook at your own peril.

« Guns and Comms: One Blast Can Be Deadly» Why Every Startup Needs a PR Firm