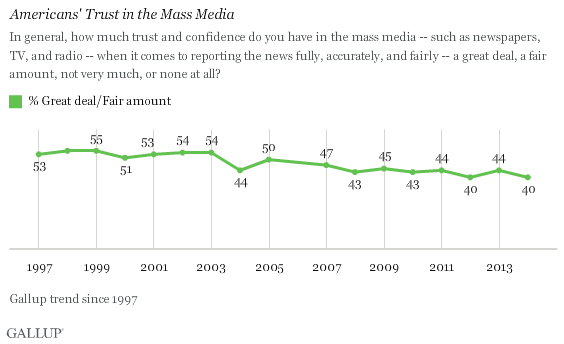 The relationship between Public Relations and Journalism has always been symbiotic. In fact, the very first PR practitioners were journalists were who were lured away to join “the dark side of the Force.” I noticed that J-team recently adopted a brand spankin’ new Code of Ethics that is best paraphrased by Russell Frank, of The Hill as follows: “According to the new SPJ code, journalists should: Verify information before releasing it And — Remember that neither speed nor format excuses inaccuracy.” Ahem. Look, the need for speed in our Twitter-fueled society has really upped the pressure on journos to get it right and also get it out quickly. adidas yeezy boost But fact-checking has really suffered these past few years. In fact, the American people’s trust of the media has declined to an all-time low of 40%. According to Gallup, after registering slightly higher trust last year, Americans’ confidence in the media’s ability to report “the news fully, accurately, and fairly” has returned to its previous all-time low of 40%. Americans’ trust in mass media has generally been edging downward from higher levels in the late 1990s and the early 2000s. So I would submit to you that never has Journalism needed Public Relations more to provide timely, accurate information, images, captions, interviews and fact-checking. When the relationship works, PR assists the media and everyone wins because the story is right and right on time. When journalists try to go it alone, odds are they lack the time and the resources to get the job done, because it’s a pretty hard job. After all, we’re up against Harvey Levy and TMZ with its virtually unlimited resources and noticeable lack of a code of ethics. So PR has a vested interest in making sure the people continue to trust the media and the media simply need to do a better job following their new Code of Ethics and rebuilding what they’ve lost. As I said, they have no better ally in this battle than their friendly neighborhood PR professional. chaussures ugg femme Oh, and to the PR pros who think they can just bypass the media and become the media themselves. Yeah, you can’t. Because if 60 percent of the public doesn’t trust them, you can be sure that 90 percent won’t trust you or your client. The media is the best shot you’ve got at trust so don’t delude yourself into believing that your clever little news feed of content marketing can somehow replace them. nike magista Seriously, wake up. Fellow PR peeps, we are in this together with Journalism for the long haul. Asics 2017 And I wouldn’t have it any other way.