Who Are You Gonna Trust? 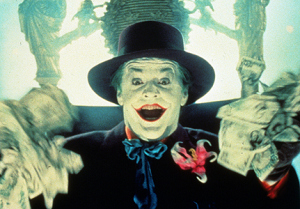 One of my favorite movies of all-time is Tim Burton’s “Batman.” One scene has Nicholson’s brilliant Joker character standing atop a parade float and saying to the crowd. “Who do you trust….?” Then he makes an argument (free money) why they should trust him even though let’s face it, he’s the villain. Trust is in the news once again this week in a couple of instances directly related to the PR profession. First, we have a PR Manager from Activision in the UK who was recently convicted of defrauding the company out of £18,963 (approximately $29,000) and spending the funds on multiple shopping sprees, a luxury hotel break, and a bachelorette party. Even more troubling than the crime was Judge John Hillers’ statement during the sentencing. nike air max thea He said “What is surprising is that cases like this are happening more and more often in your industry. But this is not the place to explore the PR industry.” Umm…generalize much, there Judge Hillers. This stupid greedy act not withstanding, would you like to compare the ethics of the PR profession to say the Legal profession? Yeah, I thought not. …And apology accepted. Second, I saw a story today about a new search engine tool that combs over online news copy and determines if the source was originallly from a press release. Gasp! Like just saying that is a wholesale indictment of the journalistic integrity of a piece of news writing. nike cortez Give me a break. Good press releases, and I’m not talking about the kind that some companies use to boost their damn Google search rankings in less than seven minutes, are a useful tool for journalists to get all the facts for a news story. And news flash — they are written by PR people who usually were former journalists. in fact, the first PR people were hired by the Westinghouse Corporation straight from The New York Times. I’ll go on record as saying that just because a scientific or technical article was written from a press release does NOT mean it’s automatically false or some sort of slick marketing trick. Two very interesting stories here, but I’m really talking about trust. Who we do and do not trust is a decision we make every day. adidas tubular shadow Some people give it away freely, some lock it up like a medieval princess in a iron chastity belt, but it’s every person’s individual choice to trust. All you can do as a company or brand is be worthy of it. We’re Not Worthy, But Want to Be — Here’s three ways your company or brand can be worthy of your customers’ trust

In the age of reality marketing that we’re living in, trust has never been more key. Can you trust PR and their evil press releases? Sure, when PR is practiced with ethics.. Can you trust business? Sometimes, when they’ve committed themselves to being worthy of it. People, the T-word is the root of all relationships, personal and business.